Thank goodness for Pinterest. About a month ago I pinned a picture of a homemade doll hair detangler. I was hoping it worked, since my daughter's Target brand "American Girl" doll had some seriously tangled hair, and it was making her seriously sad! I am happy to announce that it worked! Because the blog where I originally pinned the recipe from is now removed, I will repost it here.

Basically you will need a spray bottle, liquid fabric softener, water, and a wire brush or wide tooth comb. Fill a spray bottle with 2 tablespoons liquid fabric softener, and then fill the rest with water. Shake to mix well. The first time I worked on the doll, I used a wire brush, but later for the Barbies I just used a wide-tooth comb and it was fine.

I wish I had taken "before" pics of my oldest daughter's doll. Let's just say it was an unmanageable ball of tangles, that could not be tamed into ANY style, not even a ponytail. My daughter got two new outfits for Christmas, and couldn't use the hair accessories for either of them because Sunny's hair was so mangy. Here is Sunny now. One thing I will say is that Sunny lost a LOT of hair in the process. Like, several handfuls. But I figured it was better to have less hair that my daughter could actually style than more hair in a big tangly ball. For my younger daughter's doll and the Barbies, they lost hardly any hair at all, so I think the key here is to detangle early and often! 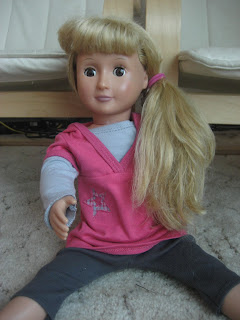 Here's my younger daughter's doll, Jenny. Her hair didn't start out nearly as bad, because it doesn't get played with nearly as much. Minor tangling problem. 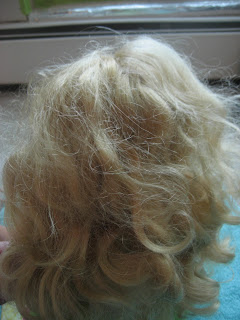 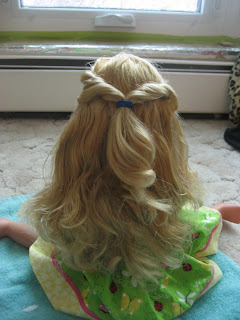 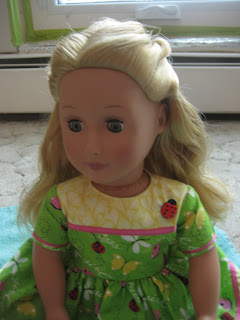 I worked on some Barbies while I was at it. Here are their nice smooth manes. 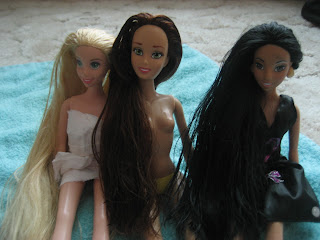 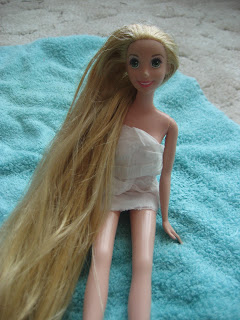 I actually did this for my older daughter's doll on Christmas Day, and at the end of a full day being spoiled by presents, delicious food, and tons of family time, I asked her what her favorite part of the WHOLE day was. And guess what she said? "When you fixed Sunny's hair." Seriously. Could have saved myself some money on presents, I guess!

So try it out! Let me know if you have any other helpful tips!

This really works - I did it today with my niece's Madame Alexander 18" doll. Her wasn't tangled into knots yet, but my niece had trouble combing and fixing her hair because it was so straw like in texture. Usually she would give up on doing the dolls hair and bring it to me to fix it for her. So today we just mixed up 2 Tbsp fabric softener with water (I used a clean peanut butter jar to mix it up in). We poured it over the doll's hair after first wetting it. We let it set for a few minutes and then rinsed it. I sprayed some detangling spray on some troublesome spots when I combed it out. Already her hair looks better - my niece thinks it is much prettier now. I think she will be able to do her dolls hair herself now - which is what she wants (she is a super independent 5 year old that hates having people do things for her!!) So, thanks so much for posting this - my niece is really happy today because I found your post!!

The one we used was probably around 8 oz. You certainly don't need that much of the mixture, but that's the size bottle we had.

Thank you! I had pinned the recipe and was so disappointed to find the blog was gone! I'm so glad I was able to save my daughter's dolls! I saved her "Our Generation" doll and her Rapunzel Barbie type doll. Amazing!

Thank you! I had pinned the recipe and was so disappointed to find the blog was gone! I'm so glad I was able to save my daughter's dolls! I saved her "Our Generation" doll and her Rapunzel Barbie type doll. Amazing!

Great, Diana! Glad it worked out for you!

Thanks for posting! it worked for us too. Question -- my daughter wants a doll like Jenny in the picture! Do you have any idea where you got it?

Hi Selina,
Glad it worked for you! We got the Jenny doll at Target. For a full run-down of American Girl doll brand versus an off-brand like Our Generation from Target, see this post: http://simplycleanliving.blogspot.com/2013/02/american-girl-doll-versus-generic-is-it.html
Thanks for reading!

How much water did you mix with the 2 Tbsp fabric softener ?

Rebecca, we just used an 8 oz. water bottle and filled it with water. So, 1 cup of water for every 2 T. of the fabric softener.

Jaime, I don't think it matters what brand of fabric softener, as long as it's liquid.

I have a very old doll, "Little Miss No Name" circa 1965, and her hair is not just tangled, but dirty. Will this solution clean her hair as well?
Pamela~

Since I was a little girl my dream is to have a doll. It is because we are only poor and we cannot buy one. And now I can buy my own doll.


Hi, probably our entry may be off topic but anyways, I have been surfing around your blog and it looks very professional. It’s obvious you know your topic and you appear fervent about it.

This didn't work for me😵

Does this work on "split ends" as well? My daughter has a rainbow dash headband that I got the knots out of, but it's all ratty at the bottom now ��

Worked great! My daughter received the baby doll she has been forbidden to play with as a gift for her 4th birthday- it was her grandmother's doll when she was a child. It has no monetary value but is priceless to us. The hair was horribly matted and has clearly been cut at some point. I put 2 T fabric softener and a little over 1 C of water in a measuring cup and poured it on the dolls hair. I smooshed it around a bit, like you would do with shampoo, and then rinsed it. I carefully combed it with a wide-toothed comb. The hair looks SO much better now!

PLEASE don't use this on a real American Girl doll! Their hair is a different fiber, the same as is used in higher quality wigs and synthetic hair for humans called kanekalon. Fabric softener will cause the texture to change for the worse and can cause mold to grow, plus attracts dust and dirt! I don't want to see another very expensive AG doll ruined with this!

My fabric softener got all chunky and separated from the water. What brand do you use?

What if you rinse it afterwards? The other method I saw said to spray and comb then rinse and dry very well. We have an AG doll that got left on the floor and my cat was having some potty problems. I've tried to wash gently with baby shampoo but the smell will NOT go away. Was hoping the fabric softener option would work better since it's a stronger smell...

This type of blogs is really very-very useful for the users. I appreciate your effort. Thank you for sharing this type of blog. best detangling brush online.

So if you use spray bottle with the water and fabric softener do you have to rinse the barbies hair out or is it fine to leave in?

It was a really nice to read blog post. Thanks a lot for sharing that stuff. Frontal lace wigs

Excellent information provided by you through this post. I follow all the mentioned information. As we all know Dolls are some of the oldest toys that children have ever played with. Reborn Baby Girl Dolls are packed with potential for teaching children about themselves and the world around them. Playing with dolls is useful in developing your child’s sense of grooming and hygiene. If you want to buy best Baby Girl Doll Toys for your babies, then you can visit us at: babymajesty.store

That's a really impressive new idea! 메이저놀이터 It touched me a lot. I would love to hear your opinion on my site. Please come to the site I run once and leave a comment. Thank you.

Omg..just tried this, worked like magic! I used about 2 cups of distilled water...thx much for sharing info. YOU SAVED THE DAY

Where I'm Hanging Out

Most Clicked This Week!

What I've Been Reading

How to Be an American Housewife
by Margaret Dilloway
This book was sort of okay, but the pidgin English of the main character was distractingly bad. I find it impossible to believe that someone would not pick up any sort of pronouns or verbs in 40 years of living in an English-speaking com...

Things We Set On Fire
by Deborah Reed

Gold
by Chris Cleave
While this won't go down in history as one of my favorites, I did really enjoy it. The ending was so suspenseful to me, I was skipping half a page at a time just trying to see what happened. And while I know that some people found the en...

Memoirs of an Imaginary Friend
by Matthew Dicks
I literally could NOT put this book down. I devoured it in one sitting, and was left wanting more. Though some parts in the middle dragged, the originality of the storyline and the strength of the writing bumps this book up to 5-star ter...

Wonder
by R.J. Palacio
By far my favorite book of 2013. I loved it so much that I bought it in hardcover, making it exactly the second book I have purchased in the past 5 years. This is the story of a 5th grader who was born with a facial deformity, and his ex...